Whale shark encounters rank close to the top of any snorkeling bucket list. With a head like the hood of a Ford, dizzying dots and tiny eyes discordant with its utter mass, this endangered animal is the largest fish in the oceans. The mockery for divers, of course, is that you’re most likely to find whale sharks near the water’s surface better with a snorkel Tube in your mouth instead of a regulator. Whale sharks live all around the world in cooler waters. If you're looking to eliminate this experience off your snorkeling bucket list, each of the below destinations are among the best places to come really close with these docile and huge beauties. 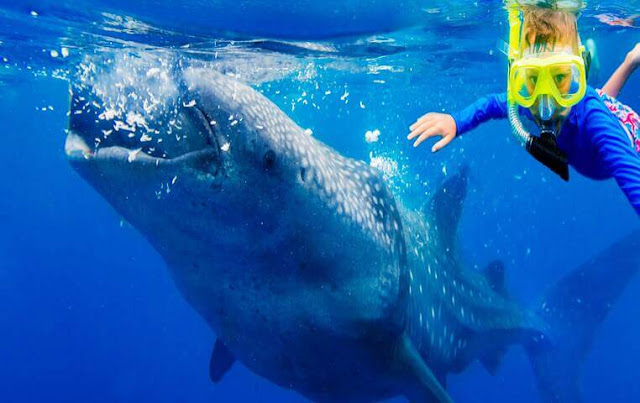 Get ready for the thrill of a lifetime when you’re face-to-face with the world’s largest fish.

Whale shark encounters rank close to the top of any snorkeling bucket list. With a head like the hood of a Ford, dizzying dots and tiny eyes discordant with its utter mass, this endangered animal is the largest fish in the oceans. The mockery for divers, of course, is that you’re most likely to find whale sharks near the water’s surface better with a snorkel Tube in your mouth instead of a regulator. Whale sharks live all around the world in cooler waters. If you're looking to eliminate this experience off your snorkeling bucket list, each of the below destinations are among the best places to come really close with these docile and huge beauties.

Just recently Whale Sharks have become a popular activity in Baja California South and La Paz. Most of the visitors that swim with Whale Sharks there come from Cabo San Lucas or San Jose del Cabo, a nearby Tourist Hot Spot with over 4 million visitors a year. After a new road was build from Cabo San Lucas to La Paz which shortened the travel time to just below 2 hours snorkeling with Whale Sharks has gained tremendous popularity, which is not a surprise, the beautiful Whale Shark is a main attraction anywhere.

When to Go: Mid-November through the end of March for fantastic encounters

Local fishermen in Holbox, island off the Yucatán Peninsula, did not pay attention to the Whale Sharks that frequented their waters every summer because they aren’t a food source. But when tourists who had been swimming with the Whale Sharks in Africa started sharing the experience that Whale Sharks can be found in Holbox, Whale Sharks are now one of the town's main attractions. Close by Isla Contoy has gained also as a popular spot for Whale Shark Encounters over the last several years.

When to Go: Mid-July through the end of August for the best encounters.

Check your moon chart! Whale Shark encounters come with the spring lunar cycle in the Gladden Spit, when snappers spawning draws the whale sharks as a natural feeding ground. Your best possibility for an encounter is three days before or after full moon. Boats have a 90-minute window in which they try to find the whale sharks. All Boats are obliged to stay 50 feet away from the Whale Sharks while divers and snorkelers from around the world are required to maintain a minimum distance of 10-feet. Only eight divers or snorkelers are allowed per guide and Boat. Photos with Flash are not permitted in order to protect the animals. Don't worry: diving with the huge Whale Shark is a mind-blowing encounter worth every bit of the rules and regulations.

When to Go: Plan your visit between April and May, when the snapper spawning attracts the Whale Sharks to Gladden Spit. 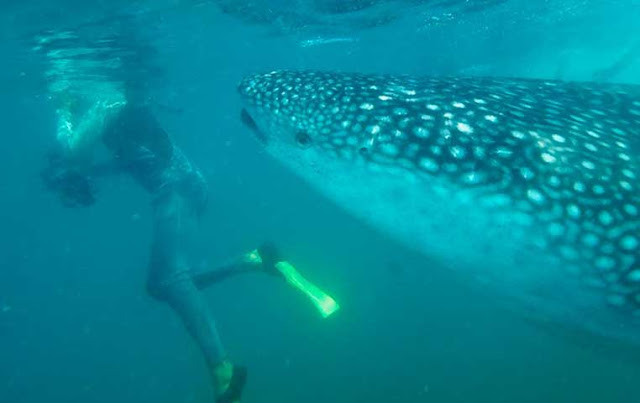 Looking for an experience few diver and snorkelers will have the opportunity to ever have? Then visit the waters around Mafia Island, Tanzania for a fantastic Whale Shark encounter. Normally migratory, the Whale Sharks around Mafia live in these waters all year-round, scientists believe it is due to the area’s abundance of plankton and shrimp. Swimming with Whale Sharks in this off the beaten path destination is not an all-year activity though; they live far away from land in deeper waters for most part of the year.

When to Go: October to February is prime time, the whale sharks move to shallow waters.

Famous and well-know Donsol Bay to the north, for a different kind of Whale Shark encounter, travel to Palawan’s Puerto Princesa. Boats look for whale sharks between dives or on custom trips to see the animals and then assist you into the pristine waters set up with a snorkel and mask to live the nature show. You can go through a dive shop to book your encounter, or local guides, which are often local fishermen, also take visitors in traditional outrigger Bangka’s to find whale sharks.

When to Go: The best conditions occur April through October.

Not a guarantee here, but during snorkel tours and in between dives is when nearly all Whale Shark encounters happen in Utila. It is one of the few places in the world where the animals can be found all year long. The deeper waters on the north side of the island is where the animals are most often spotted, guides look for the clues of specific water boiling with jumping tuna and flocking Seabirds.

When to Go: All Year Long. 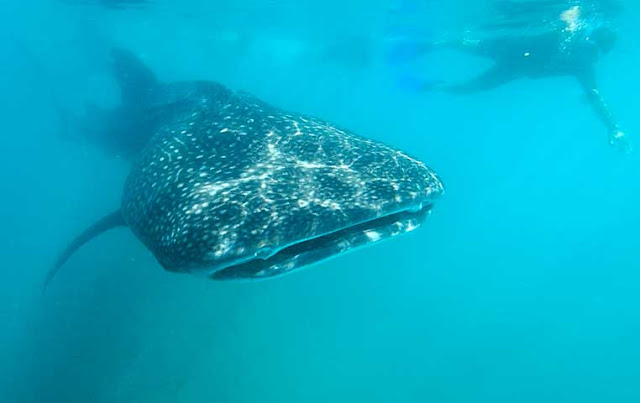 Whale sharks get together to feed in the Ningaloo Reef, a UNESCO World Heritage protected area just off of the country’s western coast. They meet in the water in tremendous large numbers that the region can promise that at least 97 percent of the whale shark tours result in an encounter. Swimmers must stay 12 feet away from the whale sharks at all times, and at least 16 feet from the tail. 12 Feet is actually very close, especially when you’re talking about a 40,000-pound huge fish!

When to Go: March to June typically is the highest concentration of whale sharks in Australia.

Home to one of the largest accumulations of whale sharks in Africa and their beautiful Coral Reefs untouched by mass tourism, Mozambique is one of those unknown and hidden, off-the-beaten-path destinations that opens up eyes and is a tremendous opportunity for fantastic photos. Most encounters with the Whale Sharks happen when the animals are feeding on plankton and krill near the surface. Cabo San Sebastian's reefs (66 to 131 feet deep) is where they’re often seen.

When to Go: November through February offers the best conditions.

Imagine you’re lost in the middle of the Indian Ocean and on a desert island that you can explore in just a few minutes of walking. Inside there is a tropical forest along with palm trees that provide you with shade. White coral sand and turquoise seas stretch out before your eyes. Underwater exists a marine paradise rich in everything imaginable, Turtles, Colorful schools of fish, Manta Rays, Dolphins and of course Whale Sharks. These are the Maldives, 1,192 coral islands divided into 26 atolls. Along the southern edge of the South Ari Atoll, smaller Whale Sharks (average 3 to 8 meters) visit to feed and grow, staying two months on average. These warm tropical waters allow them to find lots of food and an environment without predators.

When to go: Whale sharks are present in equal numbers all year round. Early May to late September is the Rainy Season. 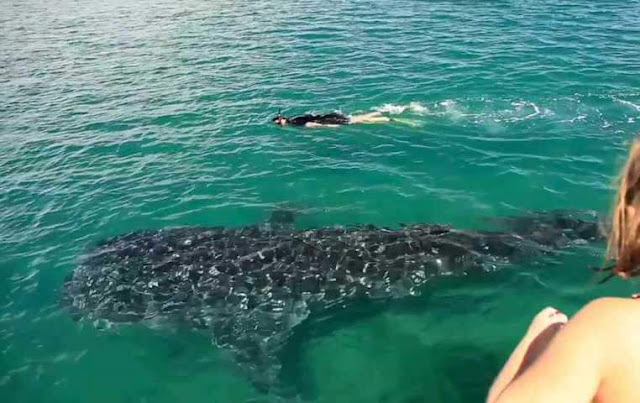 The Galapagos Islands are a volcanic archipelago in the Pacific Ocean, not far from Ecuador. Encountered by famous by Charles Darwin, these islands boast the presence of numerous endemic species, Penguins, Galapagos Tortoises and Marine Iguanas, which can be seen while scuba diving or snorkeling in the area. There’s also a wide variety of corals and sharks. Wolf Island offers unforgettable dive spots such as Shark Bay, The Landslide, The Pinnacle, The Caves, North Islet, The Elephant and The Anchorage. Darwin Island offers only two dive sites, but they are considered among the most beautiful in the world! Because of the unprecedented biodiversity of the area, Whale Sharks are among the species regularly seen while scuba diving.

When to go: The best time to swim with whale sharks in the Galapagos is during the dry season, which takes place between June and December.

My name is Blanca Garcia, I am the owner of Cabo Day Trips and a proud Mother of 2 beautiful Children, 3 and 10 years old, a passionate, just recently graduated, Executive Chef. I was born and raised in Acapulco, had the opportunity to live for 15 years in Puerto Vallarta and since 2006 I live in beautiful Los Cabos Mexico. Los Cabos has become my favorite home of all, the natural beauty and perfect weather is just so incredible. 355 sunny days, beautiful beaches and so many fantastic Activities to do. When I look back on my 1st vacation in Cabo San Lucas back in 2004, which finally motivated me also to make this my new home and change my career, the activities and tours that I have chosen surely are among my most treasured memories. I have worked all my life in the Tourism Industry, from rental car agencies to Tour and Excursion providers as operations manager and Tour Guide. When I opened Cabo Day Trips in November 2007, the idea was to provide a service not really professionally available in Los Cabos - the best selection of fun things to do in Cabo, the best prices and value possible, the safest activities available and with English Speaking customer service always available for any questions. 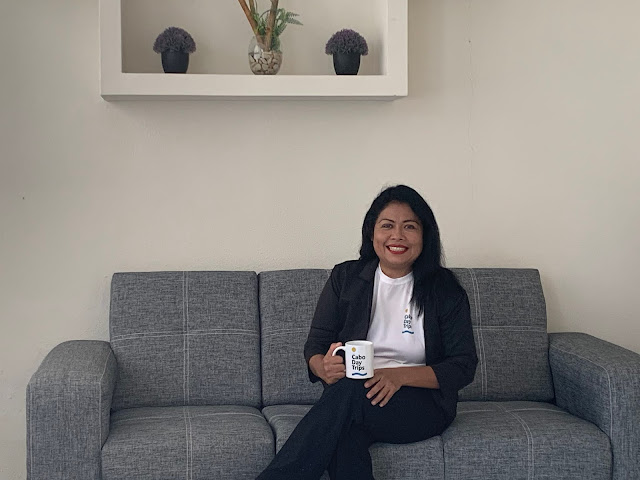 Today, we have world class customer service staff that works with unbelievable passion to ensure you have the best vacation experience possible.  Operations are run locally in Los Cabos, giving you local expertise and personal supervision, while all transactions are processed safely through PayPal or Open Pay with 3-D Secure by BBVA Bancomer, a European Bank Chain. We are registered in TripAdvisor; our brand is a TM Brand well known in Mexico and around the World. We pride ourselves and pre-screen all activities with your safety in mind with strict and international safety protocols. Our Tours are properly insured and are safe to experience. We are here to take care of all the details for you.

No worries, no stress.  We are taking care of all the details for you!